A Day of Pink and Pride

On a sunny Sunday afternoon, the streets of downtown Charlotte Amalie were covered in pink, as supporters and survivors marched and danced in hopes of raising breast cancer awareness. The Alpha Kappa Alpha sorority, Incorporated and the American Cancer Society of the Virgin Islands partnered in the Making Strides Against Breast Cancer Walk. Over 100 men, women and children participated in a 3K walk, which began at the Crown Bay Marina and concluded at the Emancipation Garden.

The day was fun-filled, including a Zumba-thon, raffle drawings and a decorated bra contest. Breast cancer survivors shared their personal stories about their fight against the disease. Their stories were very empowering as they spoke about the process of learning about their diagnoses, emphasizing the importance of early detection. 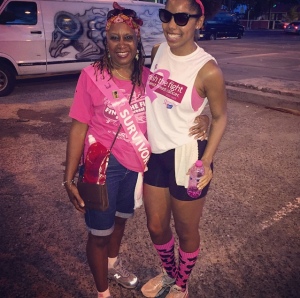 Survivors also shared how faith and religion played a large role during the healing process. “Replacing tears with prayers,” is a quote that one woman said she lived by during her battle with breast cancer. Instead of grieving, she decided to put her efforts into strengthening her faith. In addition to having a supportive family, her faith in God helped her to become strong during treatment. Of the many strong and beautiful women that showed support, my loving Aunt Valerie, (pictured right) and Family friend, Yvonne, (pictured bottom left) marched alongside. They, too, are breast cancer survivors. 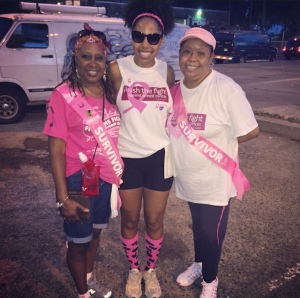 The fundraiser turned out to be a great success as the Alpha Kappa Alpha sorority, Incorporated and the American Cancer Society exceeded their goal. Proceeds from the fundraiser will allow women in the community who do not have health insurance to receive free mammograms. The Making Strides Against Breast Cancer Walk was a very rewarding experience and I look forward to seeing it grow each year as we increase awareness and one day win the fight against breast cancer .

For more information about Breast Cancer Awareness, here are 5 Things you should Know.