In honor of Women’s History Month, I’ve decided to tackle the topic of Feminism. Being a Feminist myself, I find it important to high light the success, struggles and strives women have made throughout the years.
When I tell people that I am a feminist, they often glare at me with a weird look, accompanied with the response of  “Why?” or “So you hate men?” Since the Women’s Suffrage movement, people have this idea of feminists, as bra burning, torch carrying, angry beings that hate men. That is not the case, as I find bras very useful and believe in all the fairy tales of a happily ever after. Feminists are merely people who believe in the equality of both genders, which means that even men can be feminist too.

Beyoncé’s new record “Flawless” on her self-titled album Beyoncé, has girls around the world saying, “ I woke up like this.” As a self-proclaimed feminist, Beyoncé encourages women to be confident in them selves by being proud of who they are. During the interlude, I was fascinated by this angelic voice that resembled an accent similar to mine. That woman, I later found out to be Chimamanda Ngozi Adichie, a well-known Nigerian novelist. 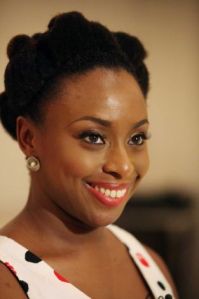 After some thorough research, I learned that Beyoncé used the excerpts from Adichie’s Ted Talk entitled, “We Should All Be Feminists,” during the interlude of “Flawless.” Adichie stated,

We teach girls to shrink themselves
To make themselves smaller
We say to girls
“You can have ambition
But not too much
You should aim to be successful
But not too successful
Otherwise you will threaten the man”
Because I am female
I am expected to aspire to marriage
I am expected to make my life choices
Always keeping in mind that
Marriage is the most important
Now marriage can be a source of
Joy and love and mutual support
But why do we teach to aspire to marriage
And we don’t teach boys the same?
We raise girls to each other as competitors
Not for jobs or for accomplishments
Which I think can be a good thing
But for the attention of men
We teach girls that they cannot be sexual beings
In the way that boys are
Feminist: the person who believes in the social
Political, and economic equality of the sexes

Her statements are powerful, as society has truly emphasized the importance of gender roles by keeping men and women separate. Because men and women are treated disparately, women are often left with the difficult decision of choosing between a career and family, where, men are left emotionless and overly aggressive.

Below is a video that was featured by the San Francisco Globe titled, “The 3 most Damaging Words You Can Tell your Son.” The 3-minute video exposes societal norms in the way America raises our young men. Redefining masculinity, by eliminating gender roles, can help in establishing equality among genders.

Another campaign that has made the headlines recently is the #BanBossy initiative spearheaded by Facebook COO and LeanIn.org Founder, Sheryl Sandberg and the Girl Scouts of USA. Beyonce’ has also joined the #BanBossy movement, an organization that is dedicated towards closing the gap between men and women who hold leadership positions. While the initiative is a positive one, it has received negative backlash due to its slogan, #BanBossy. Celebrities like Beyonce and Jennifer Gardner and politicians like Condoleeza Rice can be seen below in one of the promos that were launched last week.

Some of the negative backlash is due to the campaign’s slogan. The initiative to #BanBossy seems somewhat pointless to viewers as people feel that the use of one word does not make a significant impact in the disparate numbers that is seen between men and women that assume leadership roles. Viewers took their thoughts to Twitter and thought that more emphasis should be put towards fighting against the stereotype, instead of trying to get people to stop using one word. Although some were confused by the promo, many were in support of the campaign. Hopefully, the #BanBossy campaign will receive more support than backlash in the future as the initiative is making strides by moving towards a more egalitarian society.